Right before everything shut down due to COVID 19 we had just finished our research project on Assistive Technology at Ft Braden School. We would like to thank all of the teachers and staff who made this project possible and especially Ms. Kim Sims, Assistant Principal, who made it possible for us to do the work. We thank the parents and guardians of the students we tested. We give a big thanks to the wonderful students! We ended up with an even 100 students completed and no missing test data which is pretty amazing! This data set will yield a great deal of interesting information and is being analyzed by the lab and by Sarah Wood, doctoral student over the summer. We hope we will see you again soon Ft. Braden! 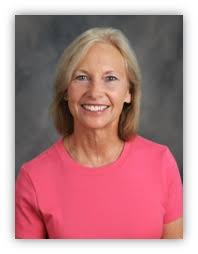 th, we lost a dear friend and colleague, Dr. Carol Connor. Carol was a passionate advocate for education and a brilliant researcher. And she was a genuine and lovely person. Our condolences to her team at UC and sadness for all of us who knew and worked with her. 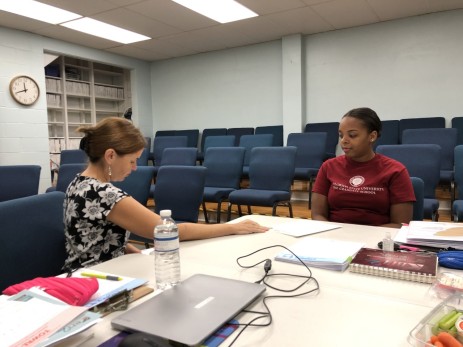 Research involving testing students is a complex process. Here Karen and Fabienne practice the measures many times until they can administer them perfectly. We are very appreciative of all the support we have received at Ft. Braden School and can’t wait to get the testing going tomorrow. We can’t thank our team, the school and the families enough.  And an extra special thanks to Ms. Kim Sims, the Assistant Principal. We hope to learn a great deal about assistive technology and dyslexia through this process. Look at the publications page to see more about the work that is being done at the WagnerLab! 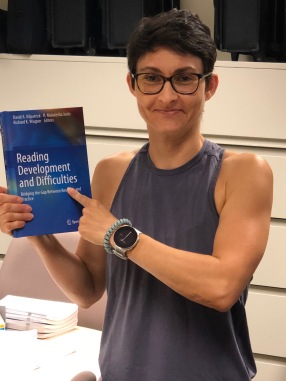 We are very proud to announce the publication of Reading Development and Difficulties: Bridging the Gap Between Research and Practice. David Kilpatrick, R. Malatesha Joshi and our own Rick Wagner are the editors. Our team (Wagner, Shenoy, Koh, Zhong, Joyner, Wood, Malkowski and Zirps) has a chapter, “Reading Related Phonological Processing in English and Other Written Languages.” Get your copy today!

We could not be more excited about our research in collaboration with Ft. Braden School. We are conducting research to understand the relationship of text-to-speech assistive technology for readers with dyslexia/learning disabilities. The project will include 100

readers in grades 3-6.  The data set that will result from this research will form the basis of Sarah Wood’s dissertation and further her work on assistive technology. We greatly appreciate the generous partnership with Ft. Braden leadership, staff, teachers, parents/guardians and students. We hope to be able to conclude our work by the end of January 2020.

Education researchers often create observation systems in order to better understand how children behave and function in classroom settings and how their instructors respond to and educate them. While researchers or other observers, such as school principals, watch a livestream of the classroom, teachers make written observations and notes based on their interactions with students and the ways in which they instruct them. The results obtained allow researchers to help educators develop new teaching strategies that can be used in order to further growth and the acquisition of knowledge in our schools. However, designing observation systems which are able to accurately measure children’s outcomes and experiences can be challenging; Connor, in a 2013 review, argues that there are five main concerns for researchers to keep in mind when working with observation systems. These five points involve: the difficulty in making observation systems accurate, accuracy being greater in systems which account for the complexity of classroom environments, accuracy being greater if researchers have a specific goal for their system in mind when developing it and if they use the system specifically for the planned purposes, the usefulness of technology, and the need to keep the use of observation systems as an accepted part of a school’s guidelines.

Observation systems are difficult to make because of the wide variety of situational elements which exist that can impact a student’s educational achievement. The quality of the teaching they are given is of course important, but socioeconomic status, family life, inherited genes, security of home neighborhoods, order in the classroom environment, and other factors can also influence development and thus learning. Therefore, the importance of the second point comes to light: in order to yield increases in correlation strength when comparing the relationships between students’ scores in observation systems and their actual classroom performance, observation systems must account for factors aside from just a teacher’s skill level. These can be partially seen in the COT and CSS, two observation systems which moderately predict student achievement in several different assessments due to the factors they control for and due to the fact that they don’t praise one of two teaching styles over another; they show the strengths of both. However, even these two observation systems have their limits; they do not control for teaching styles other than the two factored into their creation, and do not take into consideration the fact that learning styles can be mixed and that learning experiences can fluctuate wildly even within the same classroom. Observation systems should account for the strengths of various teaching styles and environments; there is a need for teachers to use flexibility in teaching, allowing them to change up methods of information presentation when working with individual students in order to cater to their unique intellectual needs. Students’ behavioral dispositions can also impact their classmates, thus leading to other effects on learning.

It has been suggested that specificity in observation systems can lead to stronger correlations in predictive ability – an observation system focused on math leads to better predictions of math achievement than does a system which tests students’ general abilities, for example. This leads to Connor’s third point, one which the CSS and COT appear to have excelled in: designing observation systems to test specific situations, and using these systems only in those situations for which they were originally crafted. As Connor describes, “the CSS and COT have been designed to be used by educational leaders to inform the professional development of teachers and the improvement of their classroom instruction. Their utility would be undermined if they were suddenly used for teacher evaluation and retention” (Connor, 2013, p. 344). If the CSS and COT are used for purposes that they were not designed to evaluate, then their usefulness as a tool will decrease. Of course, observation systems do not have to be used alone; the use of technology can be of great help in determining the effectiveness of various teaching strategies. Newly developed hardware (such as iPads) and software can make it easier to statistically analyze data, and can also make teachers’ recordings of student behavior significantly easier to complete, thus increasing the accuracy of these self-reports and eliminating some research concerns. Finally, by encouraging the use of observation systems, school administrators can be made more aware of what is going on in classrooms and can help teachers in the developments of more effective teaching practices, particularly in cases where students appear to be struggling. Although we are still not able to determine every factor that can influence a student’s academic achievement, there is no denying that the use of observation systems can nevertheless greatly increase chances of success, and can pave the way for brighter futures.

Sami has done another great summary of research. Enjoy!

A student’s ability to interpret strings of letters as words (word fluency) and their skills in understanding spoken information (language comprehension) are both very important in retaining and making inferences based on written information (reading comprehension). However, recent research suggests that, in order for these skills to be connected, students must demonstrate mastery of text fluency: the ability to efficiently read words not as lists but as related concepts and to understand their meaning when presented as a passage. It has been hypothesized that, after achieving sufficient skill levels in word fluency, this text fluency will begin to be developed with some help from language comprehension, and that text fluency soon becomes the factor which links literacy skills together and paves the way for greater understanding. In order to test this hypothesis and to determine how relationships between text fluency, word fluency, reading comprehension, and listening comprehension change over time, Kim and Wagner (2015) tracked the progress of a group of students from first through fourth grade, and the results were promising!